My New Chapter, My New Role

So here I am, finishing up my second week in my new role, after leaving my last job.

The last days already contained the to-be-expected mix of exhilaration, excitedness and strain (the good kind) from trying to cram as much things into my head as possible in a short amount of time.

My new colleagues are the people from Crispy Mountain. Right now, we’re working on Keyline, which can be described as Software-as-a-Service that functions as the brain and backbone for printing companies.
We are located in Mainz, and totally incidentally right around the corner from my favorite coffee shop. Right now I’m commuting every day, but will transition to several days remote working per week, once I feel I need less support with all those tiny, magic bits of Rails.

Before I published the blog post, I shared it privately with some people. One of them asked me if I set aside a day for answering all the messages I’d get. Back then I thought he was joking, but soon realized that I underestimated a lot of things. Beginning with the friendliness and number of people who shared my search and wished me well. Thanks so much to you all.

It continued with the amount of interesting things happening around me. And the trust people put into me, when approaching me with their endeavors and assuming, that I could be a meaningful help for them. That assumption of competence was really humbling, and a great privilege (being the white man that I am). Still I’m thankful for having had as many chances and interesting conversations as I had in the last weeks.

… all that while wrapping things up at vaamo. And about that：The people at vaamo, not the least their new Head of Engineering Timo, really helped me make time for all these conversations. Thank you! And thank you, dear awesome vaamo team, for a great farewell party and these amazing gifts 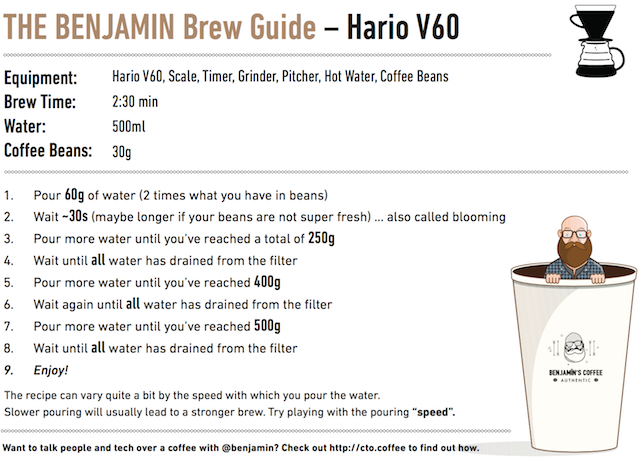 Super-Mega-Duper-Special-Thanks to Sebastian for making these great guides and cards.

Oh, want one of these brew guides? Ping me and I’ll send you some. They actually gave me a huge stack and not only one of them.
And did you notice that cto.coffee at the bottom?

You mean, that name and logo wouldn’t have been enough to convince you? Well, I can’t fathom why, but still there are more reasons for me, why Crispy Mountain is the perfect choice for me right now.

One of them is: They’re people who care about people.

I had several contacts with Crispy Mountain before already, be it an occasion to work at their lovely office or meeting Christian at a Techettes meetup, where I learned about the fact, that he coached at a local RailsGirls event and at one instance of RGSoC. In all these contact occasions I experienced them as friendly, considerate and smart people.
And talking to them several times over the last weeks, confirmed and strengthened that image.

Another reason is their approach to product development. Not only because of their team size, but because they believe it, Crispy Mountain has a no-bullshit1 approach to developing Keyline and working with customers on eye level and in a productive partnerships2. I experienced it from day one working with them and cherish it a lot, that it’s not just lip-service.

Last and not least is the fact that Crispy Mountain gives me the opportunity to dive into a new-for-me technology, as their products are mostly based on Ruby and Rails.

I’ve wanted to work with Ruby for a while now, which for me also means to get to know the Ruby Community, which I perceive as one of the friendliest and open programming language communities out there. So I’m looking forward to expanding my horizon not only technically, but also people-wise <3

In any case: If you want to know more about Crispy Mountain, got some nice Ruby hints or links for me, don’t hesitate to reach out and tell me about it.